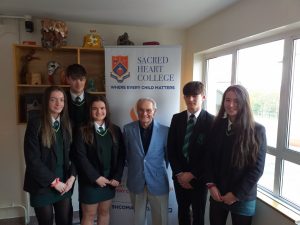 dents   were fortunate enough to be given the opportunity to attend a Holocaust survivor talk in Sacred Heart College College, Omagh yesterday. Holocaust survivor Tomi Reichental was 9 years old when the camp he was being held in (Bergen-Belsen) was liberated. He has been living in Dublin since the 1950s and came to Sacred Heart to give a talk and then to run a Q &A session. The event was filmed by The Holocaust Memorial Trust.

Dean Maguirc College History Department extends it thanks to Mr Owen Devine, Scared Heart College, for his invitation to the event and would like to congratulate him on having the foresight to run such an event. The teachers and pupils found the talk both emotional and harrowing. Oral evidence from a survivor brought the horror of the Holocaust home to all in attendance.

Mr Gavan Mc Elroy is presented with a signed copy of Tomi Reichental’s book ‘I was a Boy in Belsen’.