The under 20C colleges game between Dean Maguirc College and Largy College took place on Thursday at the Bawnacre centre, Irvinestown.

The Dean girls had come through two very tough games to qualify for the final. They beat Virginia College Cavan in the quarter final by 1pt after extra time and then St. Louis, Ballymena in the semi-final by 1pt in a replay after extra-time.  The girls had shown real character to come through these battles. However, the team had lost Claire McGarrity through injury.

Winning such games stood to them going into the final. In the first half the girls played against a strong wind. The Dean started off well and went 2 points up, however, Largy College took control of the game and took full advantage of the wind and went 2-2 to 4 points up after 15 minutes.  Once again the Dean girls dug deep and started to crawl their way back into the game.  Maeve McCrystal was very influential during this period and scored 1-3 to bring the girls back into the game.

The game flowed from end to end and at half time only a single point separated them.  Dean 1-06 to Largy 2-04.

The wind had a bearing on the second half and Largy college found it increasingly difficult to work the ball out of their defence.  The dean team became more confident and started to dominate the play.  The addition of Meaghan Clarke coming on further boosted the dean with her ability to run at the Largy defence. This helped settle the team and through Caitlin Gormley and player of the match Mairead McGarrity began to take control of the game.  A few excellent frees from Sorcha Gormley helped the Dean pull away from their opponents and a late goal from Clodagh Munroe sealed the title.

Overall it was an excellent team performance and the girls now go onto to represent the school in the All-Ireland series. The game finished Dean Maguirc College 2-19 to Largy College 2-06. 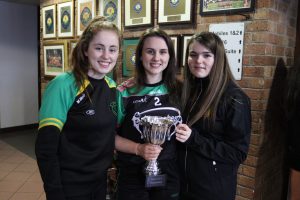 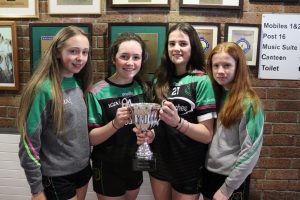 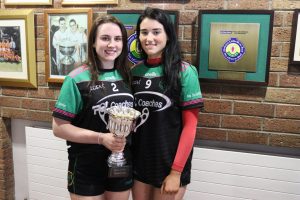 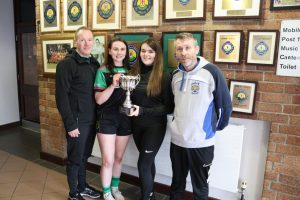 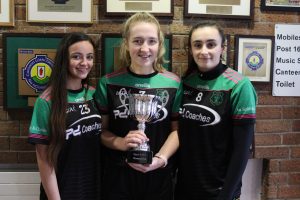 Yesterday our U14 Camogie team played Belfast West Gaels in the Ulster Final at Pearse Og park in Armagh. Not deterred by the fact that the Belfast team was a combination of pupils from St Genevieve’s high school and St Louise’s, Belfast, our girls played their hearts out in a very tough battle. A battle with both sides reluctant to give up even in the poor weather conditions.

Our captain and midfielder Aoibhinn Daly had an excellent game continuously feeding the ball in to the forward line, providing crucial set ups for scores. In the back line Mollie O’Hanlon provided a strong and comfortable position clearing the ball many times to hold the Gaels back. At half time both sides were even on a score of 1:2 each.

The girls knew that it was all to play for and any mistakes made could be a turning point in the game. Megan O’Hanlon sister of Mollie gained a penalty and scored a superb goal. The 3rd O’Hanlon sibling, Lucy O’Hanlon, stood strong in goals, providing many crucial saves. Both keepers on each side had tremendous games keeping the scores well down.

Although the conditions were far from perfect both teams fought hard to the final whistle. However it was the Dean girls who ensured a 2 point lead with 2 minutes to go resulting that on the final whistle DMC would bring another Ulster title back to Carrickmore, Final score DMC 2:3 West Belfast Gaels 1:4. A huge congratulations to the whole team on a very successful year of camogie.

The girls will now reflect on their successful year  and begin preparation for the next round of competitions. A special mention and thanks to the girls coaches and mentors Miss McCann and Miss McArdle. Thanks also to the Eire Og club for allowing the girls to use their facilities during the year. Thanks also to Pearse Og club in Armagh and  referee Shane Hughes.

The Dean U15.5 tewam won the McAvoy Cup, overcoming St Aidan’s Cootehill on a scoreline of Dean 3-7 Cootehill 2-7.

The game was played in the Pearse Og grounds in Armagh. Today was the 25th time this squad has met over the last 3 months and the result was a fitting reward for the effort forthcoming from all 28 players on the panel. Today we had a group of players collecting their fourth Ulster Title with the Dean, whilst others were collecting their first. However, the delight at the final whistle was the same for the ‘veterans’ of the team as it was for the ‘novices’. The first half was a cagey affair and was a story of missed chances for the Dean. At half time the score line was 1-3 each and it seemed the Dean had a mountain to climb in the second half playing against a strong breeze. However, climb that mountain the boys did and after a pulsating first 15 minutes of the second half the boys had built up a 9 point lead at one stage. Cootehill never gave up and rattled off 3 points in succession to leave 6 points in it in injury time. As Carrickmore supporters were calling for the final whistle Cootehill scored an excellently worked goal to leave only 3 points in it. The Dean won the following kick out of defence and were able to weather the storm and bring Ulster glory back to Carrickmore for the second time this year.

After 2 games and 2 periods of extra time, only the minimum separated ourselves and St Pius X at the Final of the Rafferty Cup in Stewartstown on Saturday.

There was little between the two well drilled sides, with the Dean boys deserving the success on the day. Our team started with the same 15 from the drawn game, but it was the positional switches that the management deployed at the second time of asking that went a long way towards winning the game.

Team captain Micheal McCann led by example with an inspirational display at corner back. Oran Toal was moved to the 40 and caused havoc every time he gained possession, while Sean Conneely and Packie Quinn were also to the fore for the team.

St Pius more than played their part in a thrilling encounter with players Ryan Laverty, Michael Forbes and Aaron Donnelly being their best players on the day.

Scores proved difficult to come by in the third quarter. An unfortunate Cathair Kelly was off due to a black card offence just shortly before St Puis became level. A great response from Sean Conneely and Oran Toal responded with converted frees before Lorcan McGarrity eased a 3 point lead with 8 minutes to go. A minute later and the ball was in the bottom corner of the net for St Puis X. The Dean boys dug deep with Packie Quinn placing Zak Devine for the lead point before Oral Toal weighed in with his fourth of the day.

The final whistle marked a third ulster schools’ title in a row for this group of players, all the more remarkable as this group of players have moved up a grade in each of the 3 seasons. A thrilling game of football from both sides with a well deserved result in the end. Special congratulations has to be said to the coaches Enda Kilpatrick and Terry McCann who have worked hard with this young team.

Conall Grimes (who was last year’s Captain ) and Cathaoir Gallagher

Ryan Gumley and Ruairi Slane with the team being captained by Cormac Munroe a past pupil.